A Picture (or ten) Is Worth a Thousand Words

Per orders from the hoof man, Gavin was to go back into work immediately to help him shed some poundage.  We did some walk, some trot, and some canter yesterday.  Nothing crazy, but he felt pretty good, albeit a little on the lazy side.  He seemed much happier in the bridle (something he's seemed fussy about for weeks).  It makes me wonder if my boy has been hiding a little soreness for a while now. 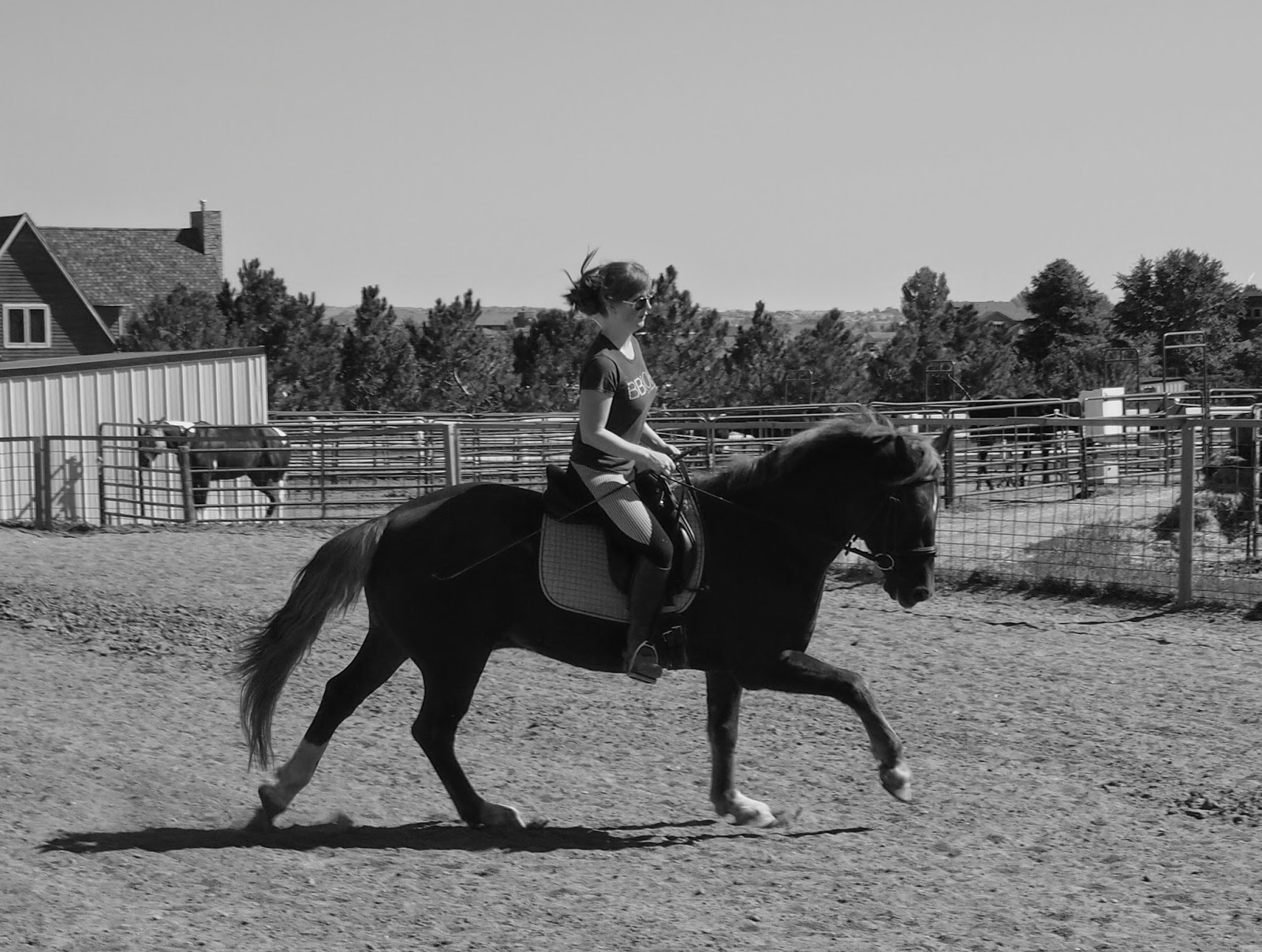 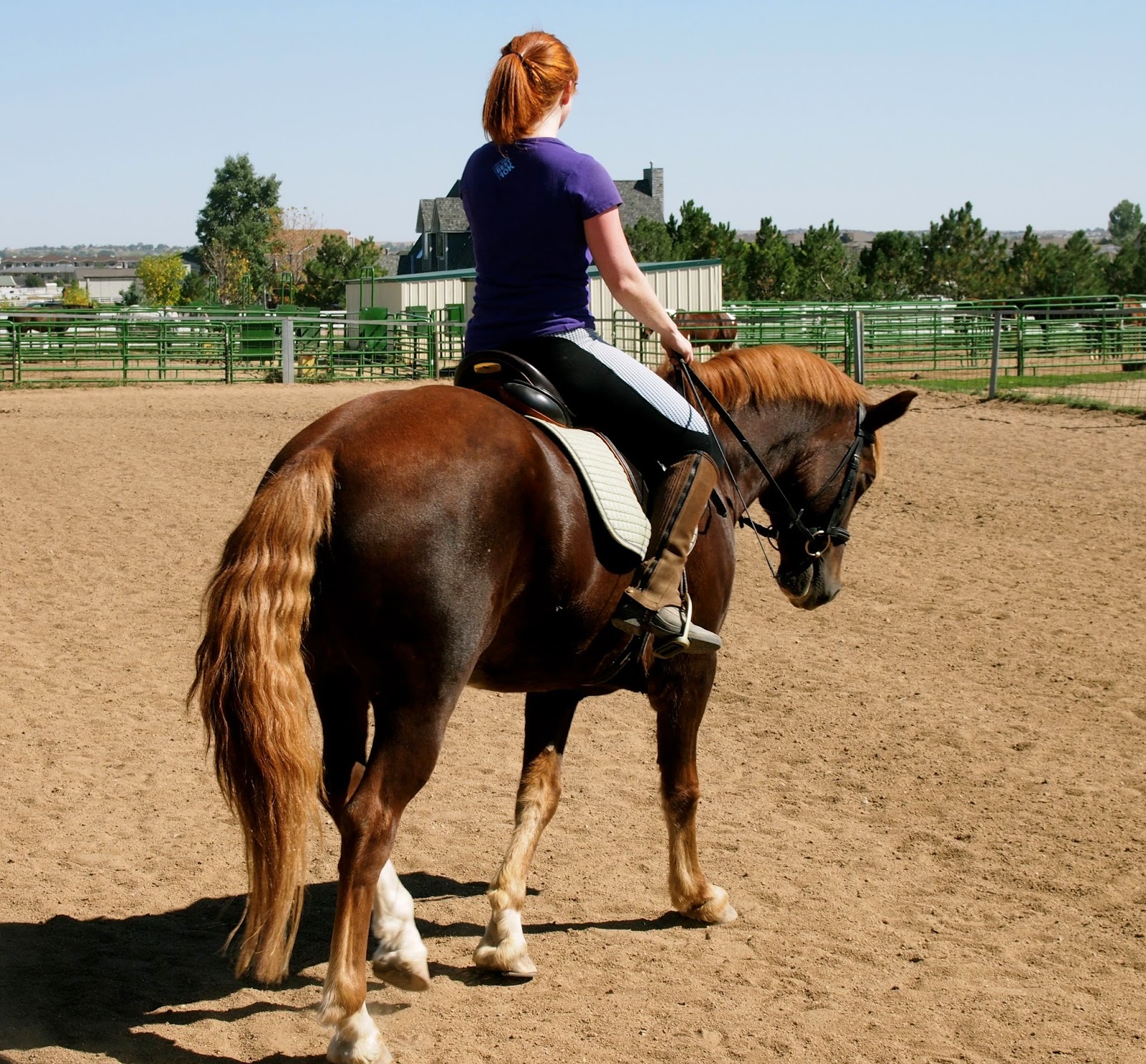 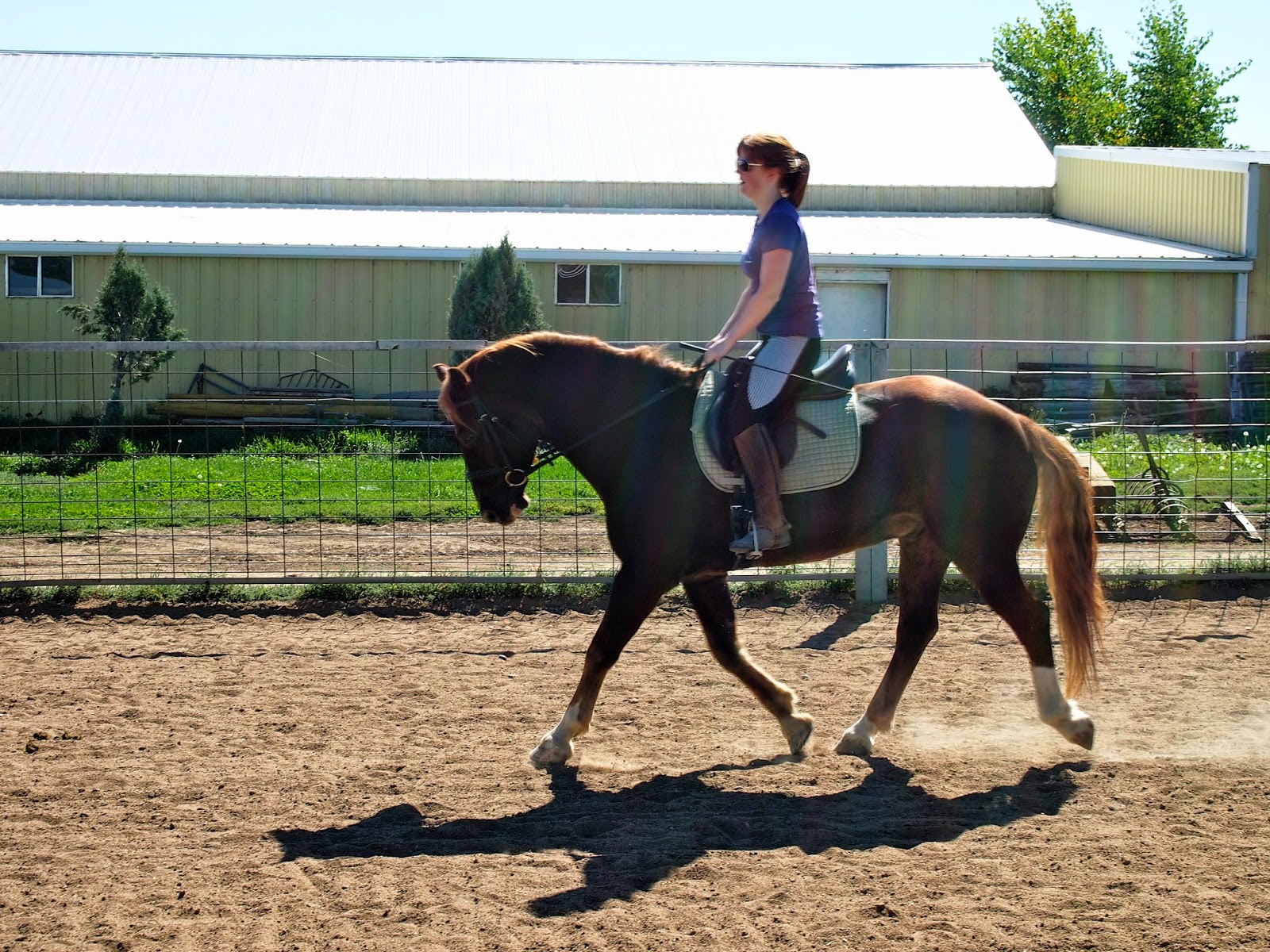 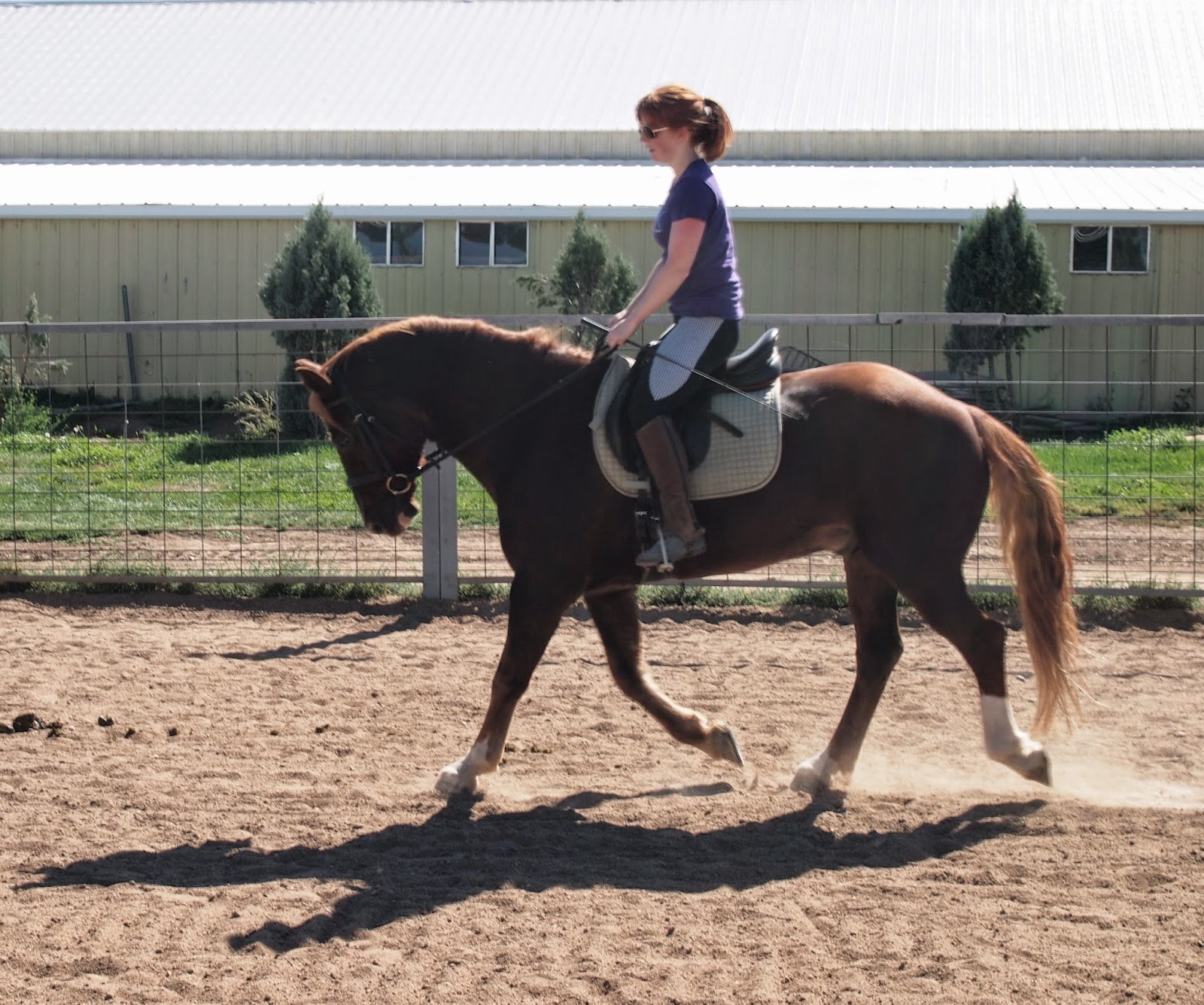 To follow up on my last blog post, Gavin was and continued to be lame since his trim over a week ago.

At first I thought, oh - he's sore from the trim.  And then I thought - oh, he seems a bit flat-footed - he must have a bruise.  The whole while I was dancing around the one thing I didn't want it to be - laminitis.  He didn't meet all the criteria for laminitis.  How could it be that?  His hoof wasn't hot, I couldn't feel a digital pulse, he rested his hind legs.  But it became increasingly obvious that my guy was sore and it wasn't going away.  This horse doesn't get sore.  This horse is built like a tank!

And there in lies the issue… tanks get laminitis.

So today my farrier/hoof vet (he's a vet that specializes in all things hoof - a horse podiatrist one might say) came out to have a looksy at good ole Gav.  After walking him on gravel and turning him sharply back to Jeremy (the hoof man), it was obvious that he was still off.  So the hoof testers came out, and my sweet boy let Jeremy know that it hurt to squeeze on his hoof.  He was so good.  He just winced a bit, but took it like a champ.

my face must have dropped

See - when Gavin moved he went from Timothy hay to Orchard grass.  Per Jeremy, the Orchard grass is significantly richer - causing Gavin to have a flare up of laminitis.  We needed to get him on the least rich variety available (just grass, no alfalfa mixed in).  So that's what we're doing.  No fresh grass for Gavin, no alfalfa for Gavin - he's on a diet of salads only for the foreseeable future.

Then came the fun part.  Putting shoes on a laminitic (is that a word?  It should be) horse who has never had shoes previously.  Jeremy warned that he might throw a fit.  I was holding him thinking "ahhhhh shiiiit".  The shoe was put in place, the nail struck annnnnd - he was PERFECT!  Like it was nothing.  Like he's had it done a million times.  God I was proud.  I think I was beaming.  :)

After his shoes were put on, we walked Mr. Almost-15-Hands (he grew about 1/4 of an inch with his platforms) the same way we had in the beginning (straight and tight turns).  He was 95% better.  The other 5% will come when he gets his diet right (starting tomorrow morning), and gets back into work.

I have always been terrified of my boy getting laminitis, but now that it's been called - I'm relieved, because I can help him. 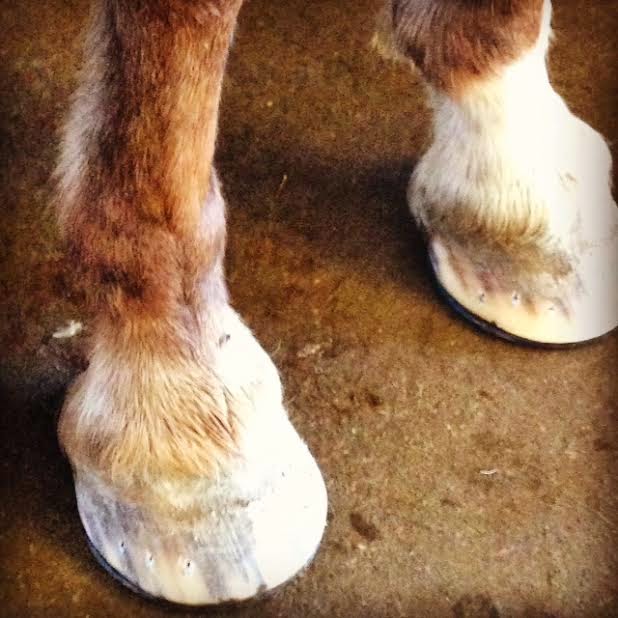 Gavin has been off for almost a week now.  I'm not sure what the cause of this sensitivity is, but it's definitely getting us down.

It seems to be a front hoof issue.  You can't really see anything unless he's walking on uneven, hard terrain (gravel, dried mud clumps) and then he looks a little ouchy.  Most of the time it looks to me like it's just in the right front, but then on occasion a misstep happens to the left.  There isn't heat in the hoof, I can't feel a digital pulse, he still rests his back legs while tied, and picks up his front legs with pretty much no resistance.  Based on these things I'm not thinking laminitis... though I'm no vet.  He did have a new farrier trim him about a week ago, and the ground at our new barn is definitely harder than at our last barn (including the arenas).

Not only am I not a vet, but I'm also not a farrier.  Having said that, I did notice that Gavin's hooves look flatter than I've ever seen them before.  To me, this could have caused a bruised sole.  I really should just get my damn vet out, but his off-ness is so slight that most people can't even see it.  I'm sure the vet could see it, but I'm not sure if there would be anything to do about it consider how slight it is in nature.  Thoughts?

Having said all of that, I hadn't ridden him in a week (until last night, where I walked him for about 40 minutes in soft footing).  He's just been getting spa days (which he loves!) - beard trimmed, whiskers shaved, mane "pulled" (cut with fancy fake-pulling device), legs trimmed.  He also turns a beautiful mahogany color in the fall, so I've been trying to get some photographic proof of that.  :)  I've also been reading George Morris' Hunt Seat Equitation book.  It reads like a textbook, but so far I'm really liking it!

﻿
In other news - my boyfriend and I bought Fudge a wig and then went to the local pug rescue gathering "Pugs in the Park".  So fun!  Pug costume contests, hot-dog eating contests, pug parades... I was in pug heaven.  :)

My boy is not only sore on his front feet, but also has some sort of goob monster in his eye.  Internally, I'm freaking out a little about his ouchiness, so to calm my nerves I'm going to blog about a trip I went on this weekend.

My fiancé and I live in Westminster, Colorado, which basically means we live in Denver.  I commute 5 days a week to my job in Aurora.  Anyone who knows Denver knows that means I have to take the dreaded 270 to work every day.  That's 1.5-2.5 hours of drive time every day, unless it's snowing, raining, or there was an accident - then it's longer.  Suuuuuck.  Shawn also drives a crap ton.  What all this driving means is that we don't like to battle the traffic to get out into the mountains on the weekend.  Shawn, who has lived in Denver his whole life, has never been hiking.  I'm not shitting you.  This is a true city boy. 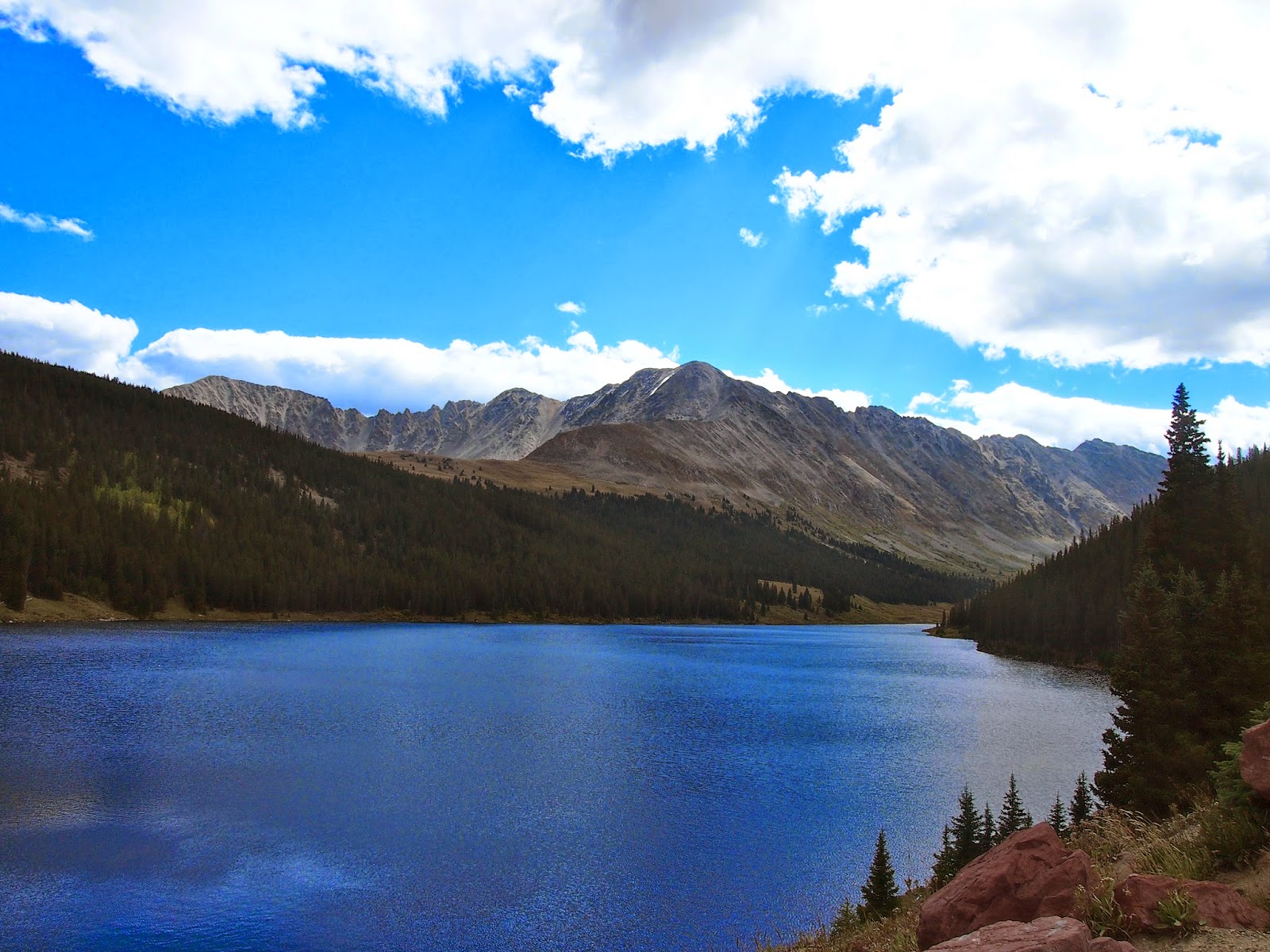 So - we decided to plan a trip to the mountains.  We rented a picturesque, little cabin and this Sunday - Shawn, Fudge, and I all drove up to Leadville (the highest elevation city in the U.S.).  On our way up to the cabin we stopped at a reservoir/valley that I named Shawn's Valley, but who's actual name is Clayton Gulch Reservoir.  I like my name better. 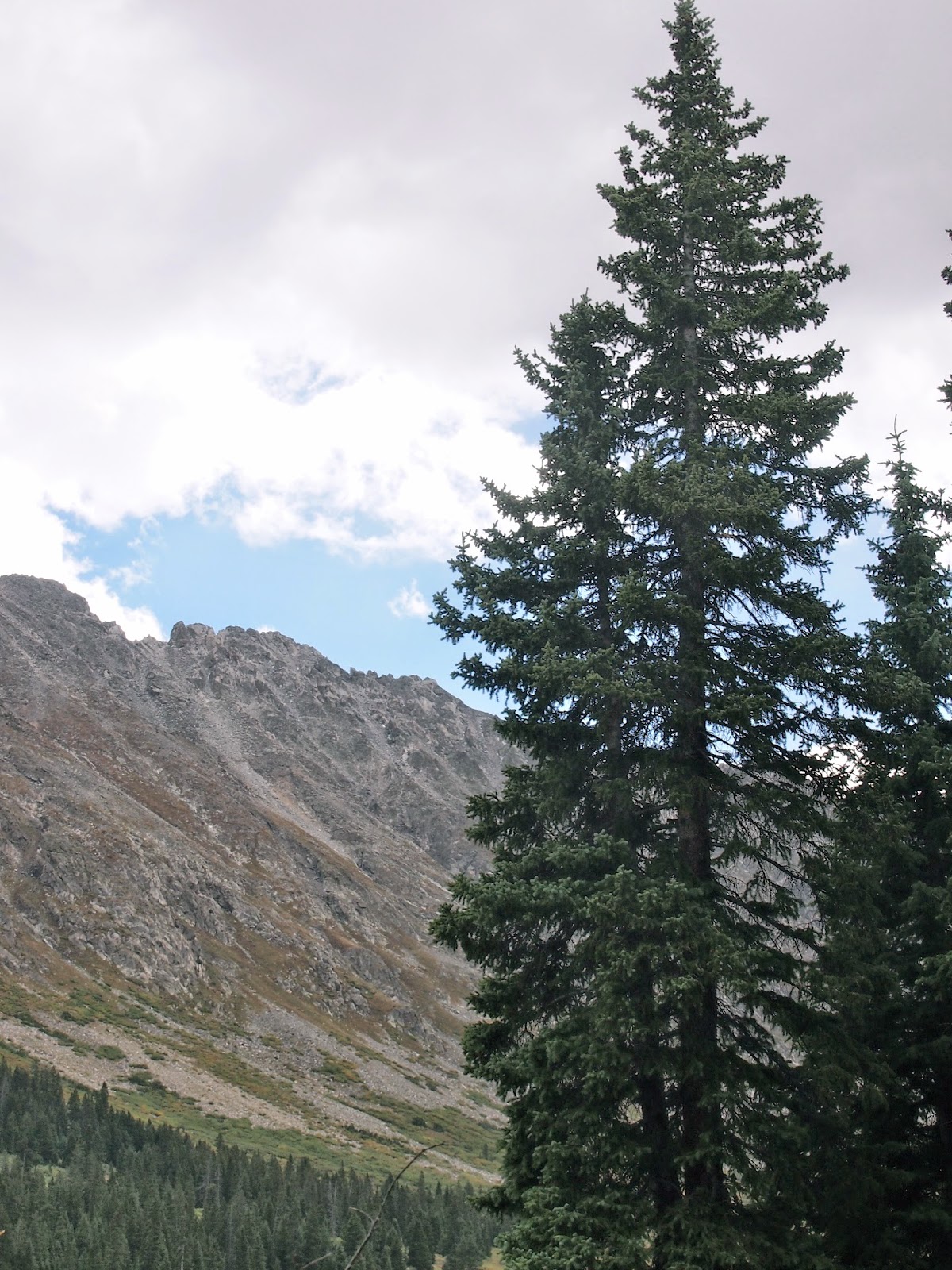 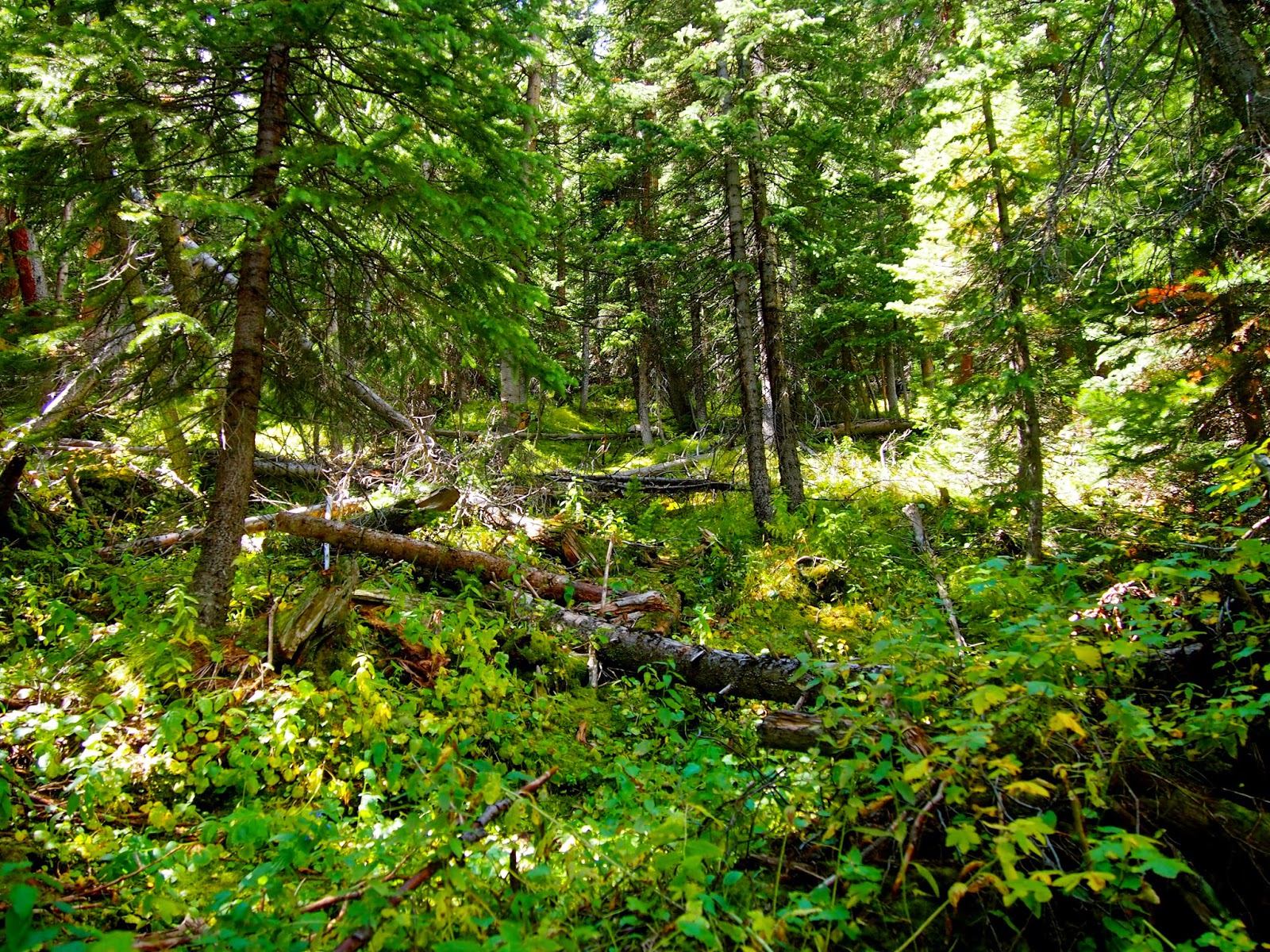 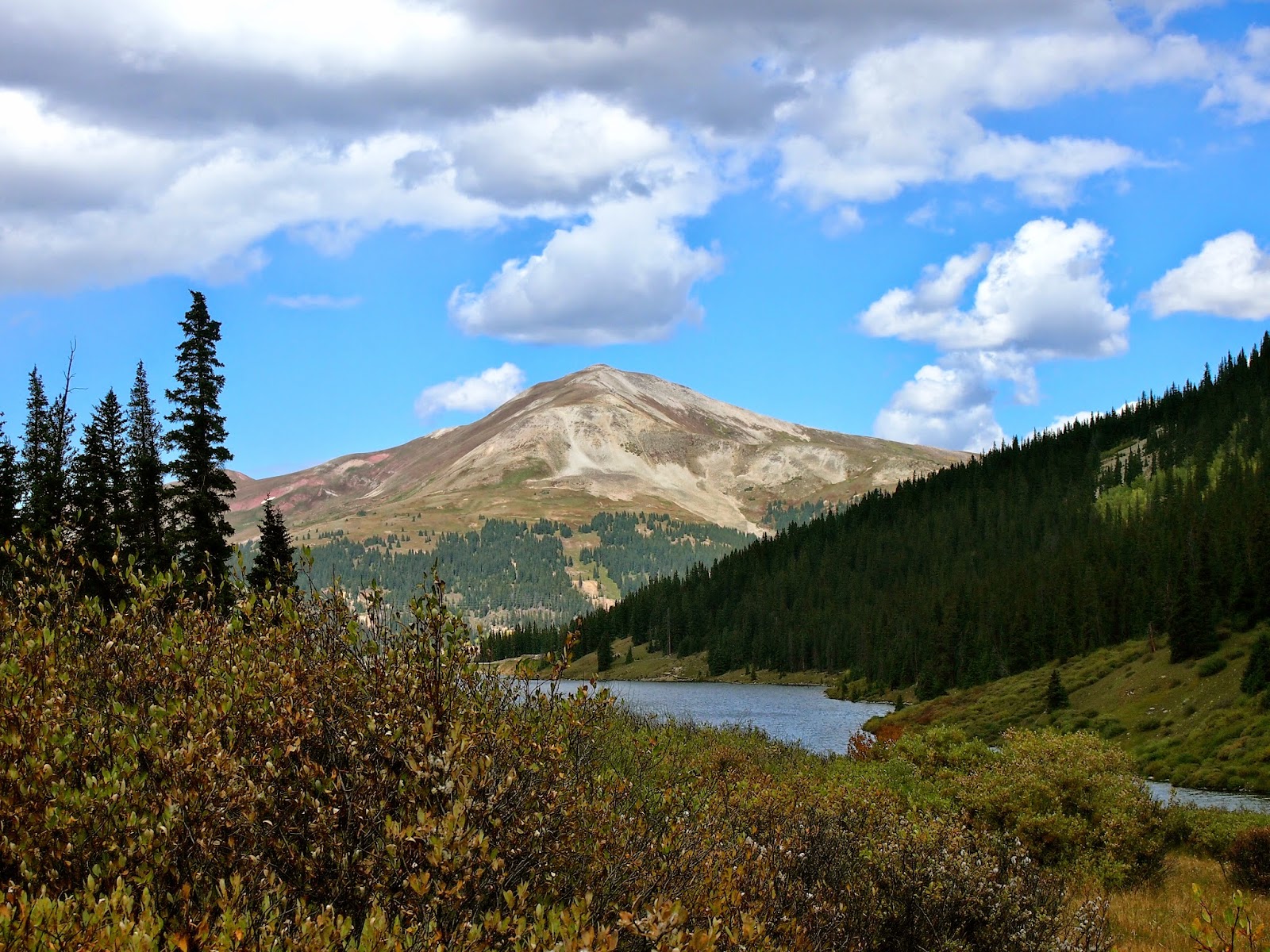 Once we got to our cabin, we realized that the pictures used to advertise for it weren't exactly truthful.  Little did we know that we were about 100 feet from the highway.  There were also 3 other cabins right near ours.  How very rustic… Regardless, it was beautiful scenery and the cabin itself was as comfortable as a cabin could get. 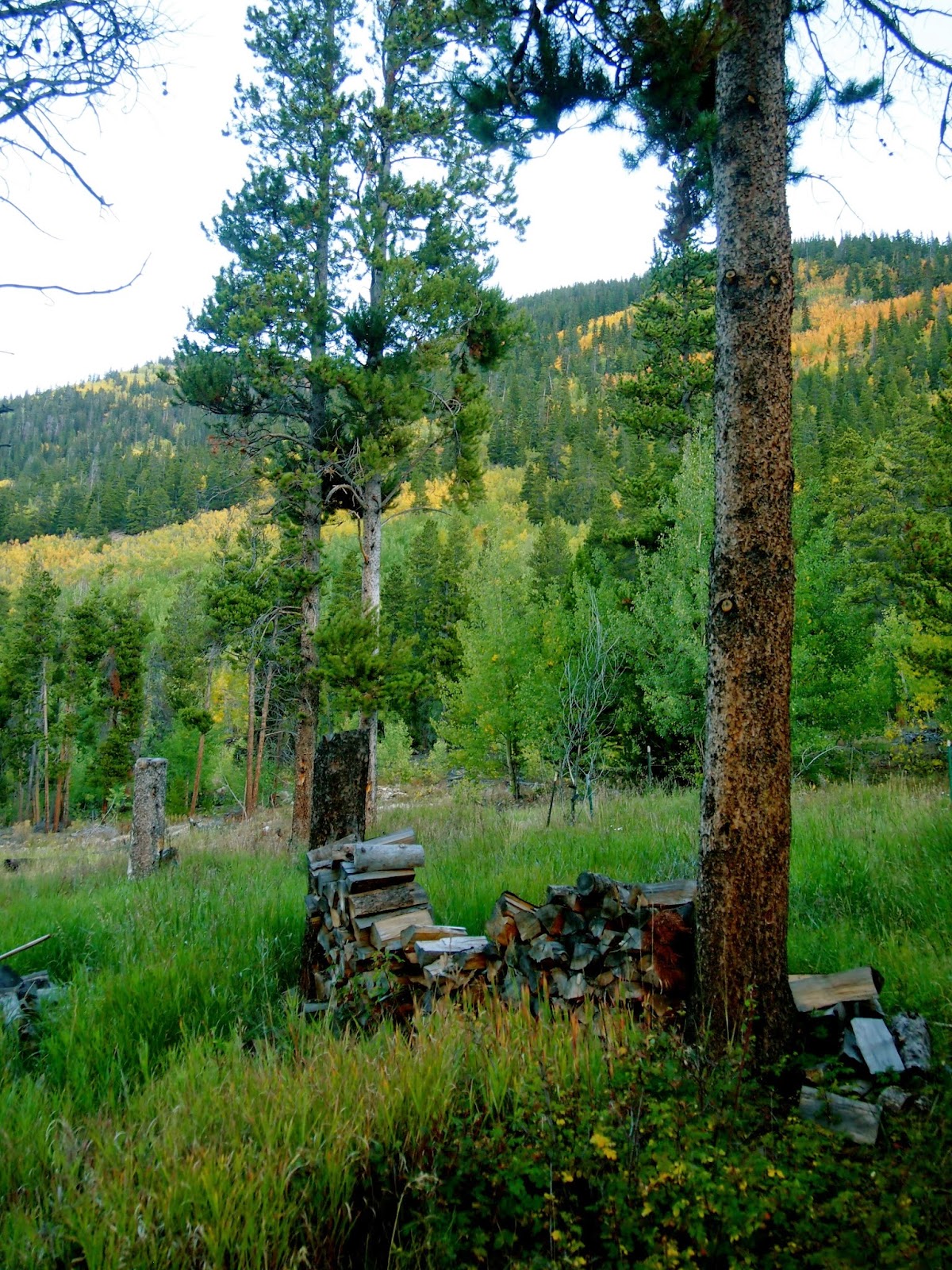 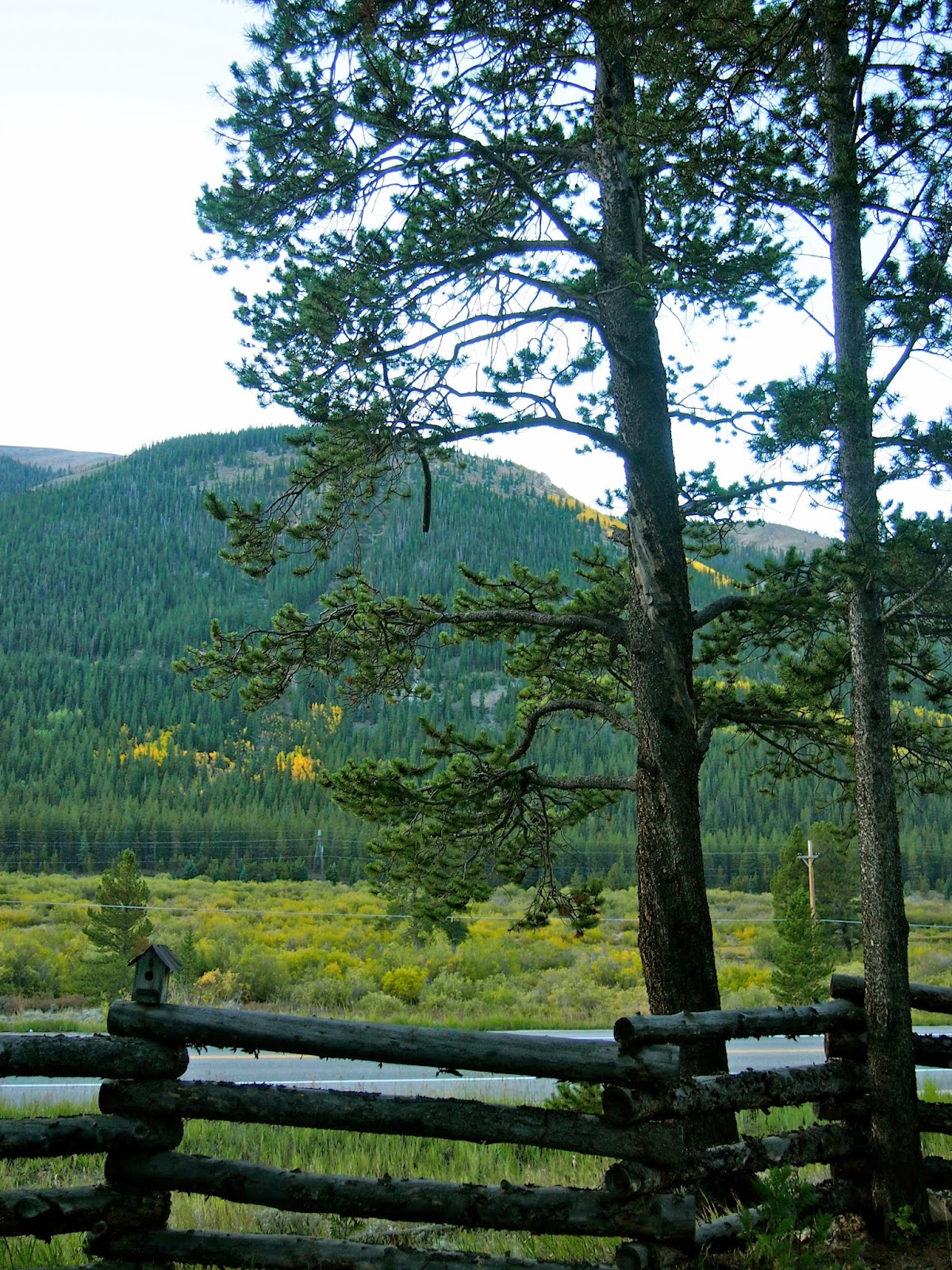 The next day I awoke to possibly the most peaceful morning (see above two pics), read my book, and then made breakfast with my bubba man.  Fueled up, we went for a hike around the difficult to locate and navigate Turquoise Lake.  The lake was beautiful, and the weather was perfect. 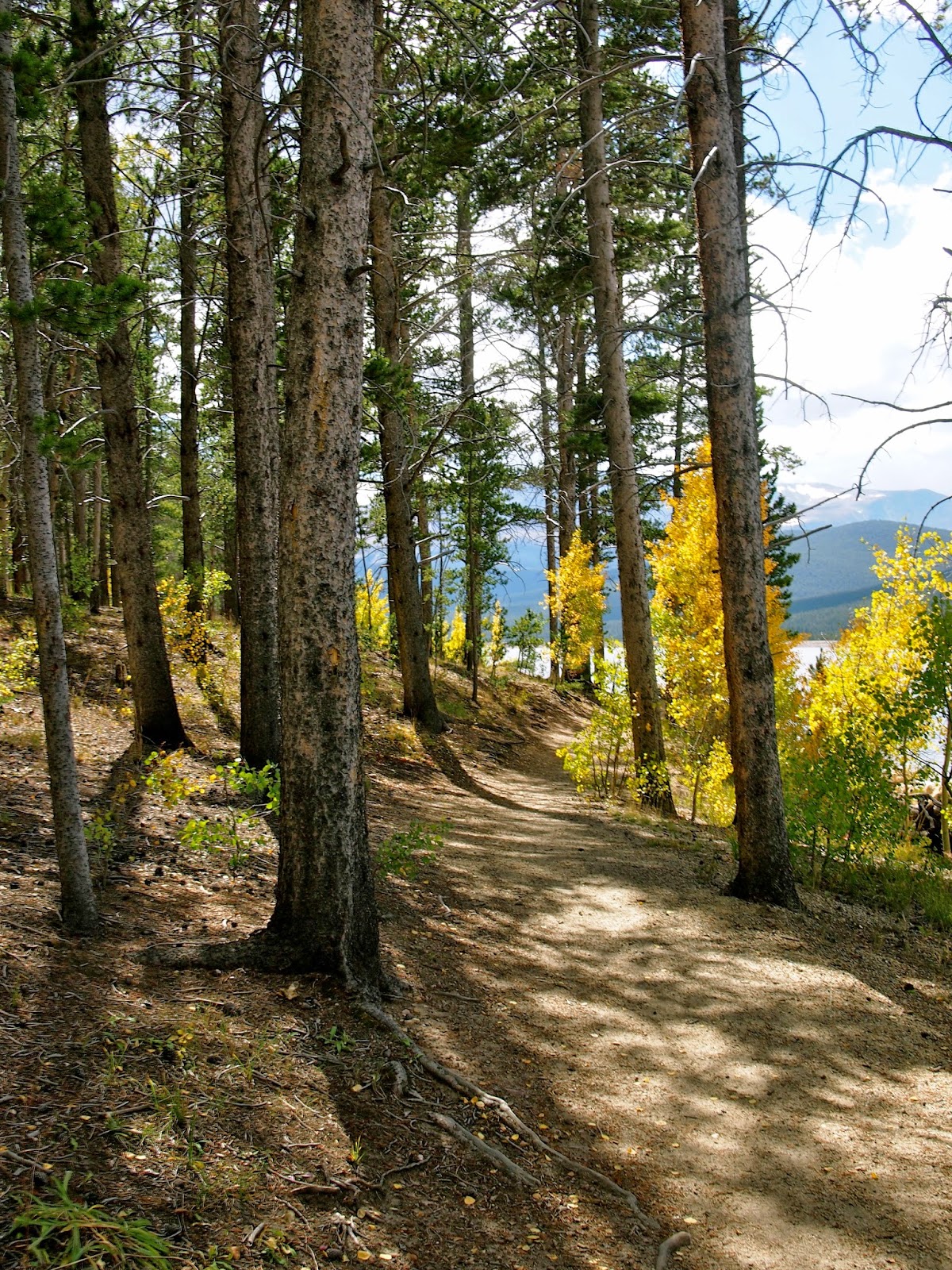 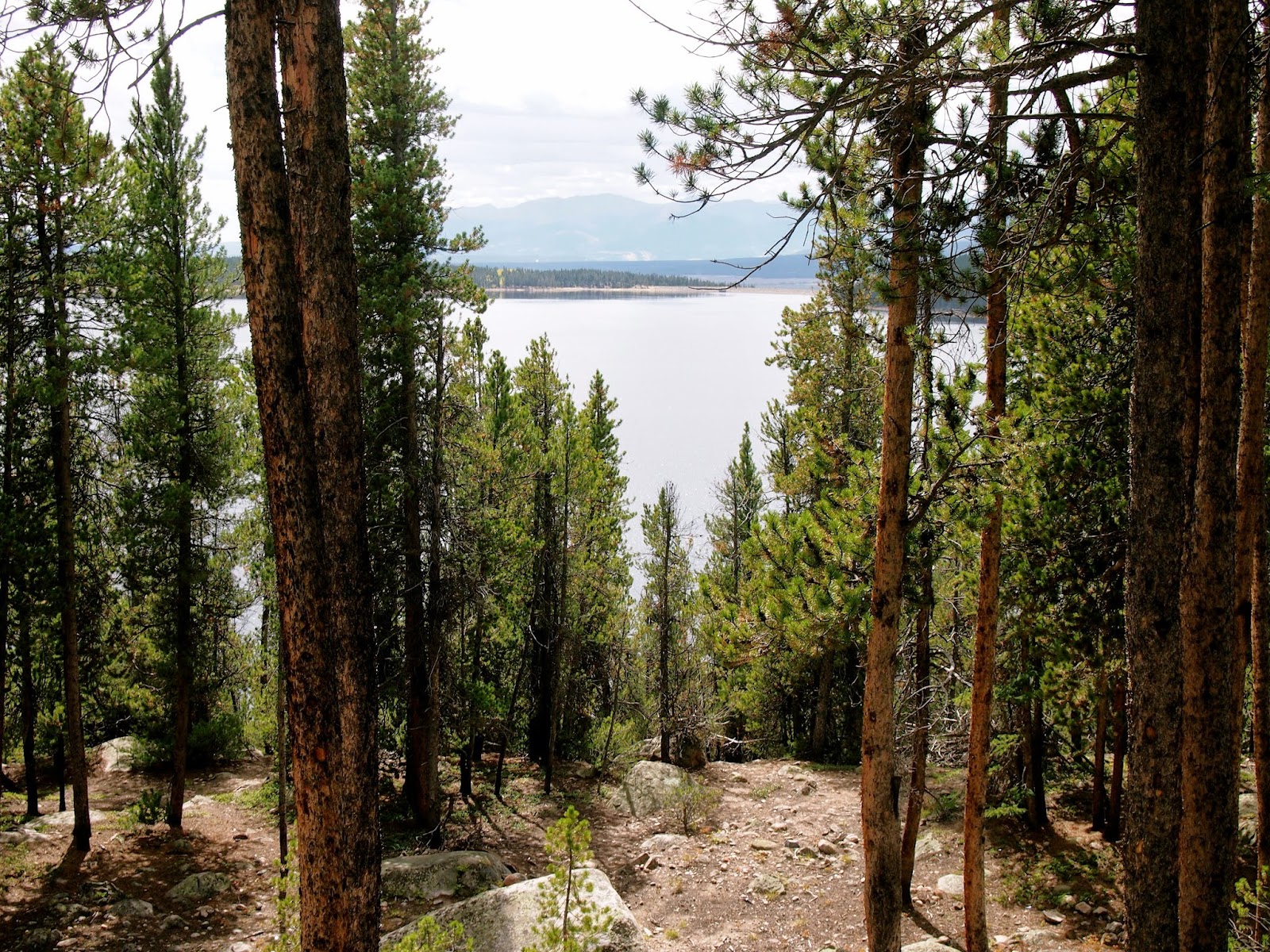 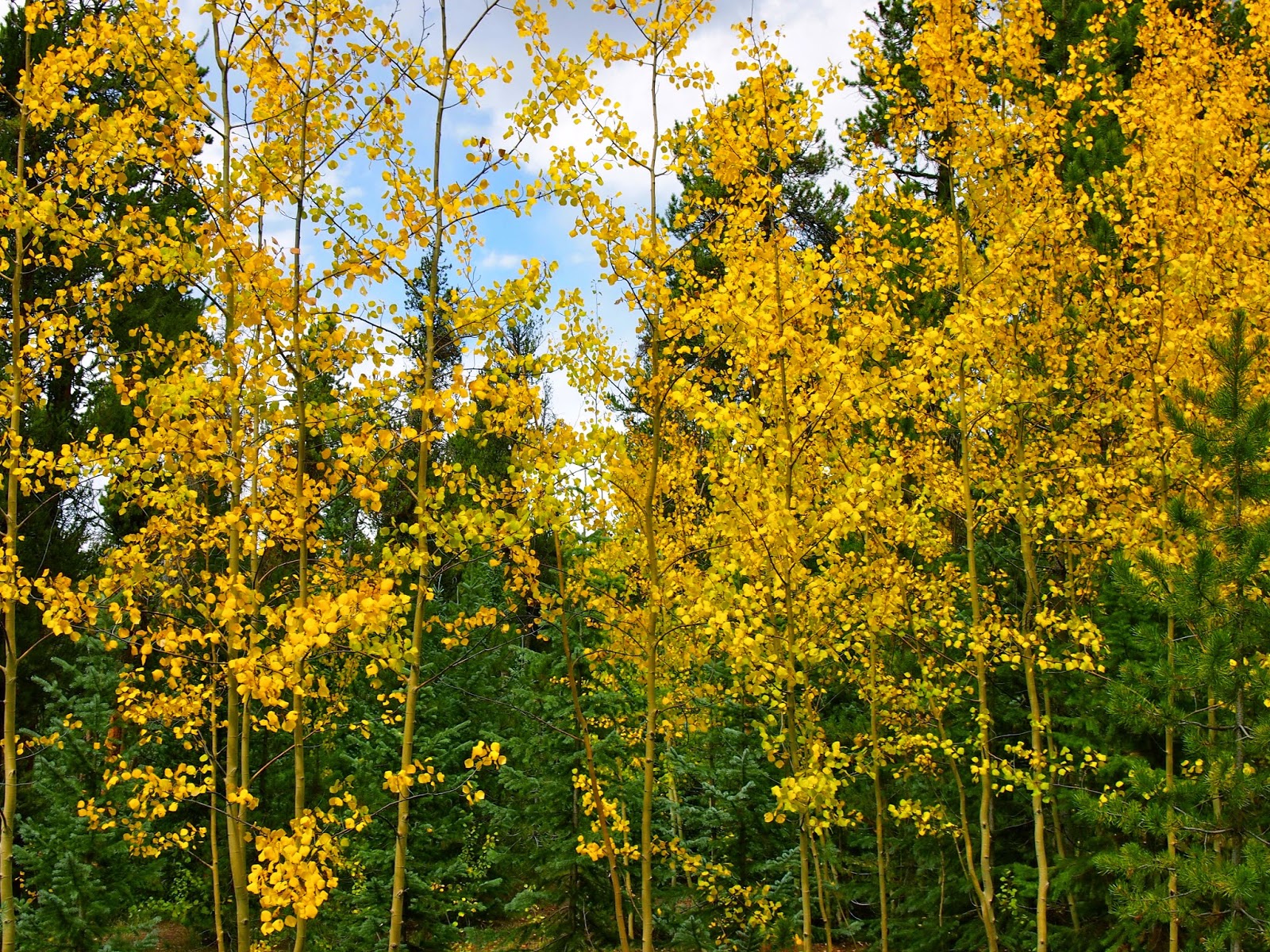 We spent the rest of that day napping, reading, walking Fudge, building and tending a fire, and just enjoying the cabin.  It was a super nice two day sojourn into the woods; one that I think we'll be repeating.


Gavin and I have had a couple rides out at the new barn.  Sadly, there aren't any mirrors (which help me gauge exactly how we're doing), but there are LOTS of jumps.  As I've mentioned in a previous post, Gavin and I have been trot/canter transitioning over ground-poles and then cantering over them after the transition.  It sounds ridiculous, but it has been REALLY fun for me.  It sounds ridiculous, because it sounds like nothing.  But to me it's not nothing, and I can tell by Gav's ears that it isn't nothing to him either.

What I like the most about it is that it makes my brain switch gears.  Normally my brain is like "frame, frame, frame, movement, movement, movement, is his tail swishing? Does he hate his job?  Was that circle more like an egg shape?  That was definitely an egg.  Shit, another egg. Inside leg, outside rein.  Wait - is that too much rein.  God I'm a pussy with the outside rein.", but when you put a cross-rail out in the arena, Gavin goes to it like a heat-seeking missile!  And my brain goes "FUN!!! but also sorta scary".  So I stop thinking about the above mentioned egg-shaped circles, and start thinking about making it over this three inch pole lying on the ground.

And, I'm proud to announce that yesterday I was riding Gav with my friend Laura and his gelding BFF, Sterling, and we started off with the trot-canter transitions and ended up doing the transitions, followed by a straight canter over a baby cross-rail.  I'm talking like 6 inches off the ground!  He did great!  He's not particularly careful with his feet, but luckily he doesn't spook or freak if he knocks stuff down.  We just go about our business.  And once we moved up to the six-inch baby cross-rail he didn't hit it at all, and did sorta-kinda hop over it.

Anyways - I'm having fun, and looking forward to learning more about jumping.  Now to find someone who wants to teach me more about it... :)
Posted by Erika at 12:09 PM 1 comment:

﻿
﻿
﻿
Gavin and his bff (Sterling) moved barns this weekend.  It's a tricky thing, moving barns.  First, you have to say goodbye to your dear friends who are staying at the barn (believe me, there will be a couple faces I will miss!), you have to give notice and explain (or at least give some explanation as to why you're leaving), and also coordinate the move.  The move was made extra hard for us because the Denver area has been hit by Vesticular Stomatitis which causes ulcerations, blisters, and sores on the inside of a horses mouth, sheath, and coronary band.  It isn't deadly, but it isn't a good thing for a horse to catch.
So, why did we move?  Several little reasons that added up to a move.
The boys moved like a dream (I swear, Gavin takes pride in trailering as well as he does).  They unloaded like gentlemen and walked around the property like they'd been there a hundred times!  The day after we moved in, they even walked in to the suuuuuuper scary indoor, cement wash rack (raised, and three sided).
I'm going out tonight to lunge Gavin.  I'm expecting it to not be a big deal at all, since he's been acting like a totally cool customer for the last few days, which happens to be just the way I like him!